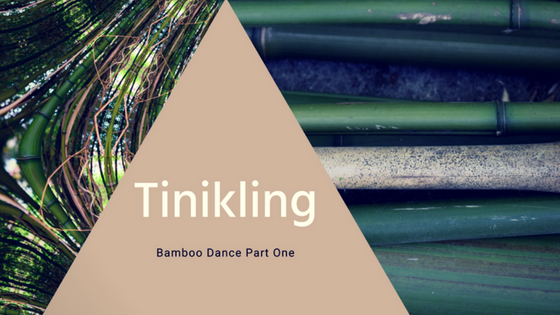 The Tinikling is most well known of the bamboo dances and often referred to as the national dance of the Philippines.

The is more than one myth about its origin. One version leads back to the time of colonialism. Workers that weren’t fast enough had to endure harsh punishments. One of these punishments was to hit the feet of the workers with bamboo spiked with thorns. They tried to dodge the sticks by hopping and jumping.

Most likely, Tinikling originated earlier than that, like most bamboo dances around the world.

The word Tinikling refers to the buff-banded rail (Gallirallus philippensis), that’s named Tikling on the Philipines. Tinikling means “like the Tikling”. It describes the fast, hopping way the bird moves that rather walk than flies.

Another Myth tells a story about a lazy little boy that had to keep the birds from eating the seeds on his parents farm. He tried to scare them away by hitting two bamboo sticks against each other. But the birds danced and hopped fast between the sticks.

When he told his family about what happened, they wouldn’t believe him the story about the dancing birds. So he showed them the “Tinikling”.

Two groups perform this folk dance. The groups persist of couples, a male, and a female dancer. One group is sitting on their knees, holding the Bamboo in their hands, clapping them on the floor. The other group tries to escape the sticks by dancing and jumping between them.

It is important that the material of the sticks is flexible. Unlike Rattan, which may look the same but is solid.

How to dance the Tinikling

The dance is like jump rope, but one uses bamboo instead of a rope. The dancing couples dodge the sticks with single steps, double steps and hops *. They will move faster and faster around while the rhythm of the clapping increases as well.

Single step means moving one foot over the bamboo cane, while a double step means to move both feet. The dancer add hops to dodge the bamboo further, so the flow of movement is important, as well as being fast.

* You can find a detailed description here

The video below shows a presentation of the Tinikling at the  Samahang Philipino Cultural Night of the University of California. Being an important part of the Philippine culture, the dance travelled to the USA with the Philipino immigrants.